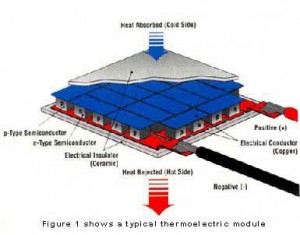 Always wondered about this..

In 1834, Jean Charles Athanase Peltier discovered that the passage of a current through a junction formed by two dissimilar materials caused a temperature change, Dubbed the “peltier effect”, it was later clarified by Emil Lenz who observed that by passing a current through a bismuth-antimony junction, water could be frozen and that ice could be melted if the current were to be reversed.